At the same time, forests and other valuable ecosystems are essential to the climate, to biodiversity, to the livelihoods of millions of people, and, at least in the medium term, also to agriculture. That means we simply won’t be able to afford deforestation in the future.

In light of the high deforestation rates related to some agricultural raw materials, corporations in particular have been taking action in recent years. In 2010, the Consumer Goods Forum (CGF), an association of the largest consumer goods producers and retailers worldwide, announced its intention to eliminate deforestation from palm oil, soy, beef and pulp supply chains. As part of this initiative, corporations along the entire supply chain, from large producers through globally operating agricultural traders to retailers, made commitments over the following years to ensure deforestation-free supply chains by 2020.

International treaties supported this process: In the New York Declaration on Forests (NYDF), adopted in 2014, corporations, states and civil society for the first time jointly committed to halving deforestation by 2020 and supporting the private sector’s goal of eliminating deforestation from palm oil, soy, paper and beef supply chains by 2020.

And yet deforestation rates have not fallen in recent years. According to the FAO, between 2015 and 2020 an average of 10 million hectares of forest were cleared every year. Satellite data from the World Resources Institute show that in 2020, around 12 million hectares of forest were lost in the tropics alone – and that figure has been trending upwards over the past five years. Especially severe is the growing and irrecoverable loss of tropical primary forests – an area the size of the Netherlands vanished in 2020 alone. Brazil tops the chart for primary forest loss in the tropics by a wide margin, followed by the Democratic Republic of the Congo, Bolivia, Indonesia, Peru and Colombia.

No corporation has succeeded in fully implementing its self-commitment to deforestation-free supply chains – not least because in many cases this would have meant excluding smallholders from global supply chains. Today it is clear that minimising deforestation will require collaborative efforts, and that policy-makers must create the framework conditions necessary to halt deforestation resulting from the expansion of agricultural land. We also need economic incentives to convince populations and corporations in current deforestation hotspots to refrain from further logging. In order to preserve forests we must create alternative livelihoods for local people by ensuring living incomes and wages, among other measures. 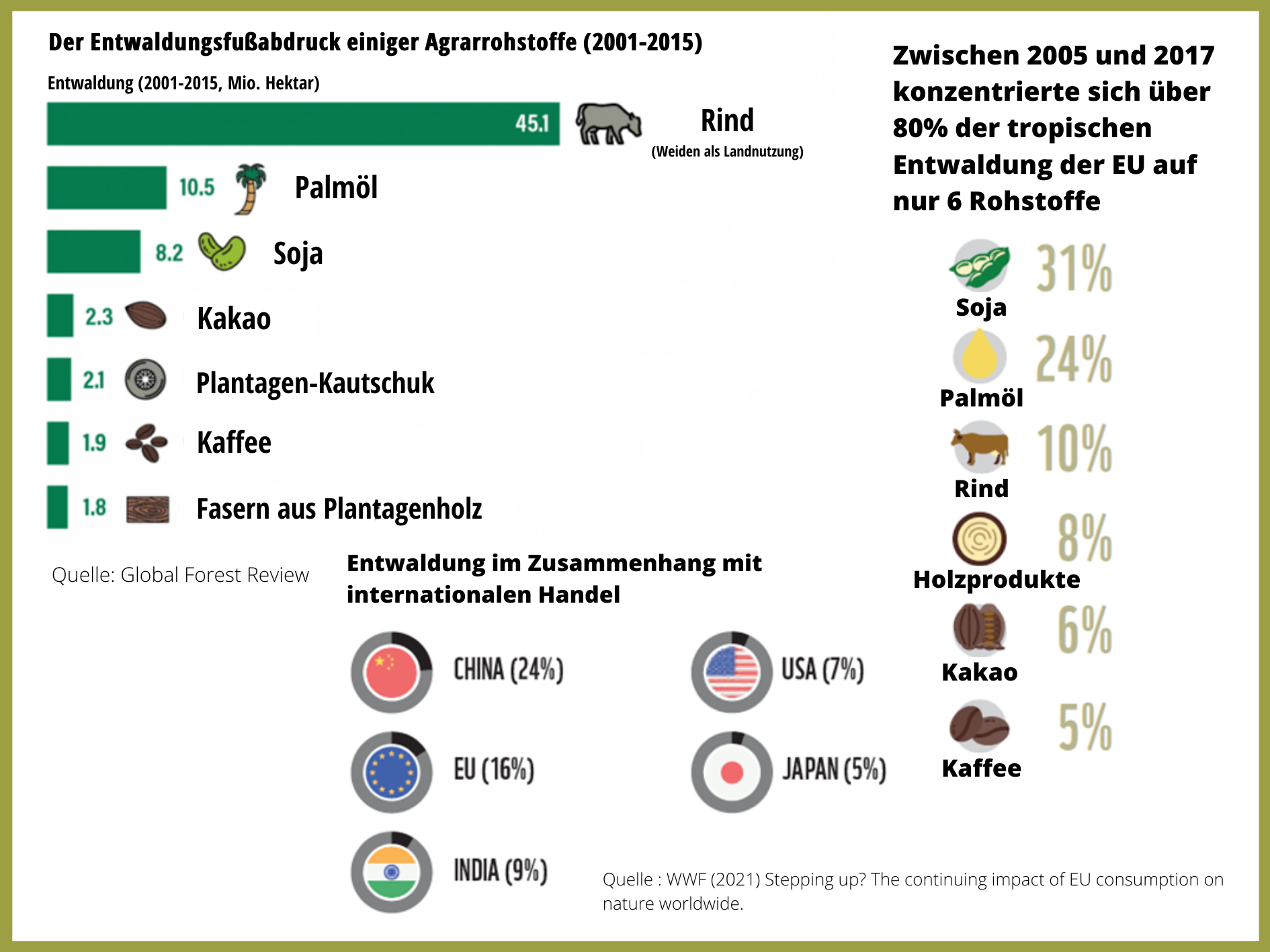 Deforestation and the responsibility of the EU

A new survey by Forest Trends moreover shows that illegal logging for commercial agriculture is on the rise, accounting for around 69% between 2013 and 2019.

But the Paris Climate Agreement will not be achievable without forest preservation: If deforestation were a country, it would be the world’s third-largest emitter of greenhouse gasses after China and the USA. Around 20 to 30 percent of greenhouse gas emissions caused by deforestation are due to international trade in agricultural raw materials.

South America and South East Asia are the regions where the highest amount of woodland is converted into agricultural crop land. Alongside commercial agriculture, subsistence farming and firewood for daily use are significant factors in deforestation in Africa. Locally, mining, infrastructure and urban expansion are also major drivers of deforestation.

What challenges and levers exist in production countries?