Mozambique needs to solve the bottleneck created by mildew. When mildew attacks trees of a small-scale farmer the loss can be 2/3 of the potential production. The Bio-Spray research done by a development partnership with the private sector (DPP) supported by the Sustainable Agricultural Supply-Chains Initiative (INA) is on the brink of a solution that is cheaper, better and scalable.

In 2017 a development partnership with the private sector (DPP) was established based on a Strategic Partnership Agreement between the Mozambique Ministry of Commerce, The Norwegian Embassy in Maputo and the Norwegian market leader of nuts Brynild Gruppen. This DPP aims to improve farmer income in the cashew sector and sets out to create more direct links between Mozambique as a cashew kernel producer and industrial processors in European markets. The German family owned snack company Lorenz and GIZ later joined the alliance to expand on the work of improving livelihoods for cashew farmers and support the Mozambique cashew institute (INCAJU) in policy development. GIZ Mozambique and INA signed agreements of cooperation in 2020 while Lorenz brought to market a dedicated high-quality cashew of Mozambique origin in Austrian and German supermarkets.

The cashew industry plays an integral role in the Mozambican economy, particularly in the rural areas of the north. More than one million households grow and sell cashew nuts, and the processing sector provides formal employment to more than 10,000 individuals supporting their families and local communities. Mozambique consistently ranks as one of the top global producers of cashew nuts and is currently the second largest producer in East and Southern Africa. With its ideal growing conditions, trade policies that now favor local processors, Mozambique is uniquely well-positioned to become the most competitive global provider of traceable, sustainable, high-quality cashew.

On-going investments in improved technologies and management practices are making the industry not only more productive and efficient, but also more ethical and transparent. These changes are priming the industry to provide large quantities of safe, high-quality cashew nuts to millions of cashew consumers globally, as well as raise farmer incomes through increased yields and premium marketing. The export of raw cashew from Africa for deshelling in Asia is over a million tons (±20 thousand containers) representing a loss of at least 100 thousand jobs in Africa. Responsible European buyers are turning to Mozambique and other African countries to buy high quality cashew creating local jobs and with a lower CO2 footprint.

Why the need for Bio-Spray

Currently Mozambique cashew trees have very low productivity. The loss of productivity occurs when mildew attacks the cashew flowers and hinders pollination and the formation of fruit in the form of a cashew-apple. Without the apple (the false fruit), no nut since the cashew is the single seed of the true fruit which is attached to the apple like an appendix. (see photo). 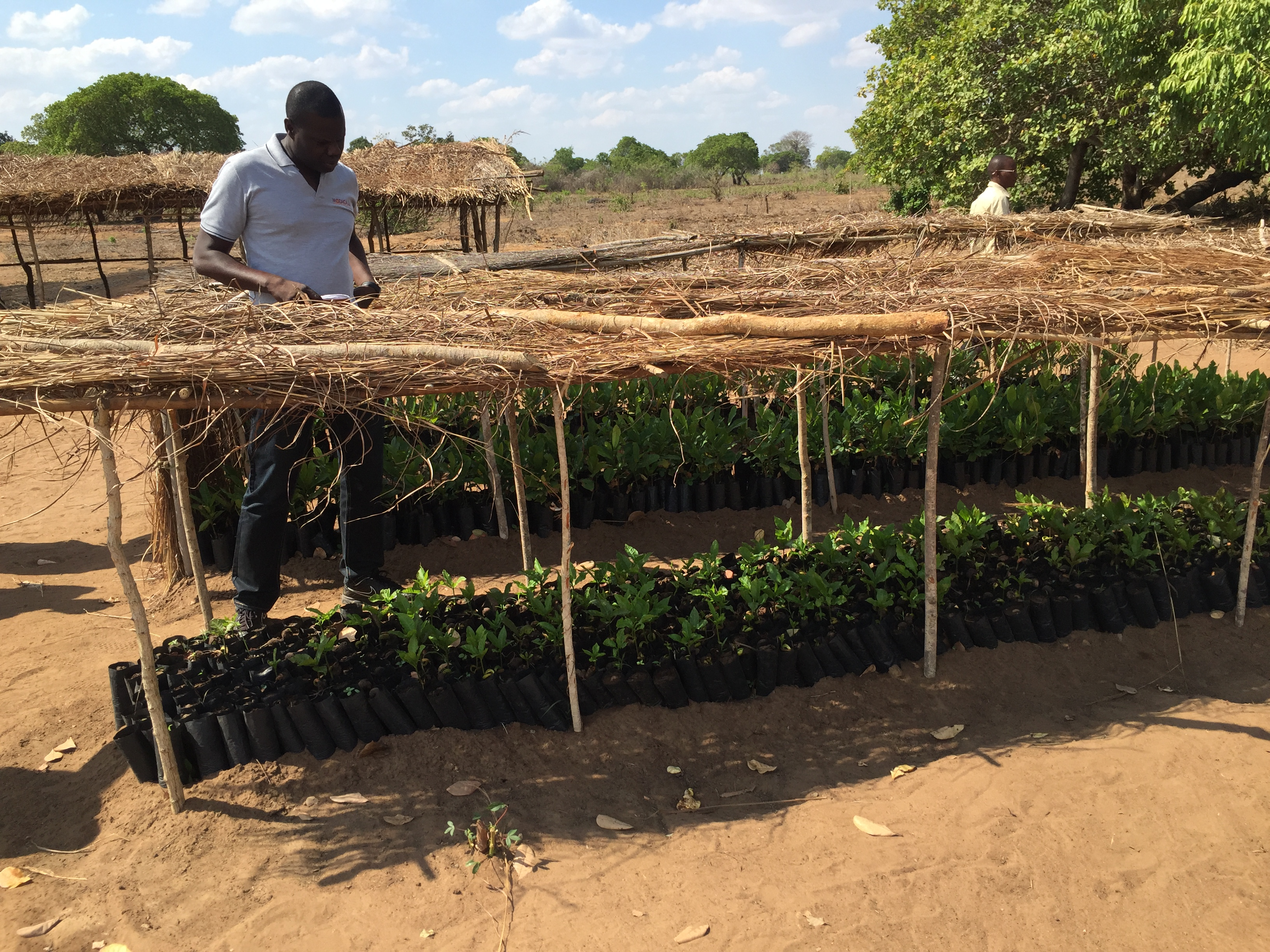 Local entrepreneur in Northern Mozambique inspecting that his young cashew seedlings are protected from the sun. 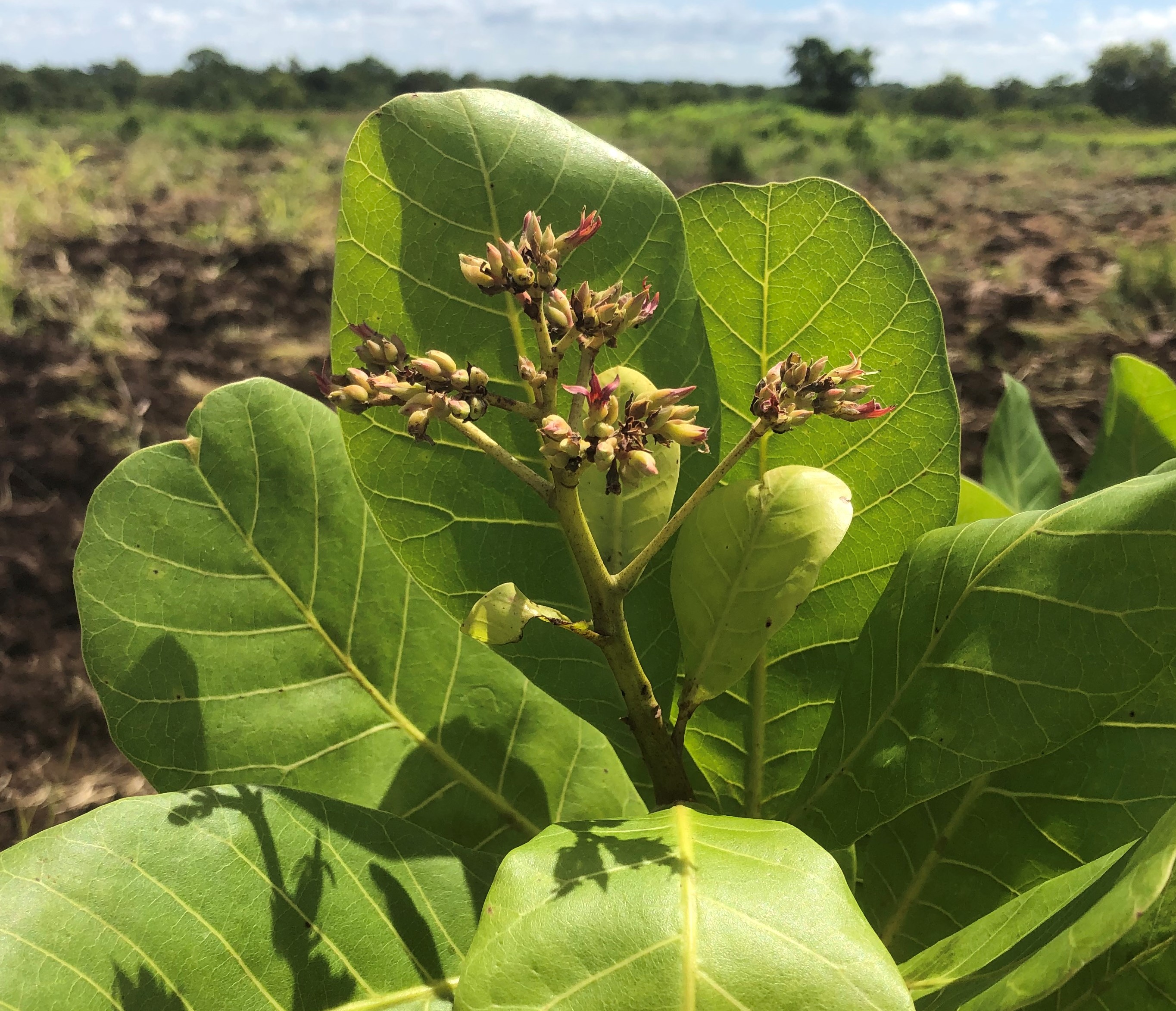 Cashew trees have many flowers across the canopy - healthy flowering is needed to secure apple and the seed/nut. 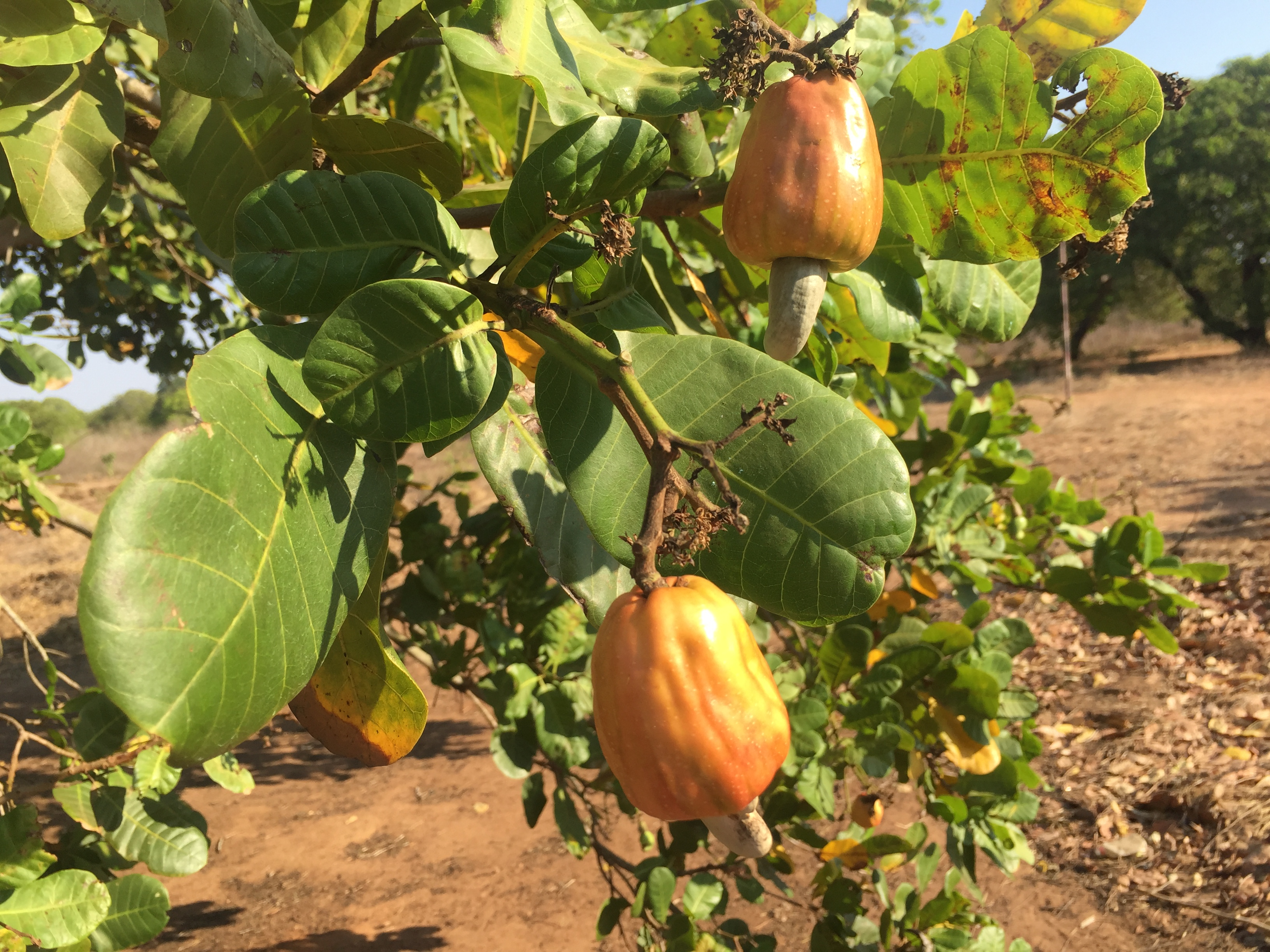 The cashew apple is very nutritious and contains sugars used in bio-spray production. One seed/nut per apple.

Bio-Spray is a cocktail of active beneficial microbes and Effective Microorganisms (EM) of three yeasts, three lactobacilli, three phototropic bacteria and at least four actinomycetes that are used as a biological enhancer of natural processes in the canopy. One of the anecdotes the current research would like to confirm or reject is that the sugars in the Bio Spray that are derived from the cashew apples itself attract a particular type of red ants and the nutrients boost the trees natural protections. After three years of testing it looks like the bio-spray can become a scalable solution based on a demonstrated ability to protect cashew tree flowering and reduce the harmful application of traditional chemical spraying. The Bio-Spray testing has demonstrated that cashew trees using Bio-Spray have produced up to 10-12kg, three times more than the national average of 3-4 kg of nuts per tree. One of the benefits verified through testing, is that the cashew apples from trees sprayed with Bio-spray do not contain harmful toxins and may be consumed safely. As such, the cashew apple can be used for human food products as well as animal feed. By broadening the use of the cashew apple and promoting food crops grown between the trees the test-runs have opened a window of possibilities leading to increased interest among farmers to plant cashew trees, secure the creation of new jobs, contribute to food security and improve the income of rural families.

For years the National Cashew Institute (INCAJU) has subsidized imported chemicals used in Mozambique to prevent mildew. This has been very costly and INCAJU has notified the cashew stakeholders that in 2020 the transition to reduce and soon eliminate this subsidy will begin. The cost of chemical pesticides is prohibitive under the current cost structure and alternative less costly methods of disease prevention should be promoted. Bio-Spray, when proven effective and made available, can become a remedy to create substantial development of the cashew sector of Mozambique. Bio-Spray in combination with other service delivery initiatives can be a key driver for farmer income, sector development and gender/youth inclusive job-creation in production and service delivery.

Can Bio-Spray open up for organic cashew nut industry in Mozambique?

With only 12% of trees sprayed during the flowering phase and no significant use of chemical fertilizers or other pesticides, the sector can be considered “organic by default”.  The broad Bio-Spray partnership is committed to the promotion of a sustainable and organic cashew nut industry in Mozambique. Due to the high production losses if powdery mildew attacks taking place, we cannot currently recommend organic cashew production. With Bio-Spray available the growers and processors can be certified.

End goal:  powdery mildew on cashew trees during the flowering phase is controlled increasing 3 times the current production and income of farmers

Cooperation between public sector, NGOs and private sector companies have significant impact on sustainable development. Consumers today expect value chains to be transparent and efficient with information available to understand the qualities and impacts of their choices. Lorenz and BG are pioneering direct purchasing from producers with local processing and placement of origin on their consumer bags.

The Bio-Spray initiative with INA/GIZ includes German snack company Lorenz and Norwegian Brynild Gruppen that source a significant amount of cashew from Mozambique. Local and international NGOs play a role in seeing how Bio-Spray also has impact on other branches of the agricultural landscape in Mozambique. Our local private sector partner Jacaranda has used bio spray in the rehabilitation of a large banana plantation to succumbed to Panama disease. The Bio-Spray ingredients have played a vital role in reestablishing healthy banana production based on natural principles and not chemicals. Similar potential has been seen in the groundnut where the farmers are having problems of aflatoxins. The increase in positive biological activity in the soils and on plants have indications of a positive effect on the aflatoxin levels in groundnuts. Aflatoxins is harmful for the local population that use groundnuts as an important protein source in their diet and is sold as a salted snack. Currently there is no export of groundnut due to this problem not being controlled and it needs a biological response that is cost efficient and locally produced. This does show that Bio-Spray developed for the cashew sector does have wider use an will create thousands of jobs for sprayers, increased income for farmers and the apple of the cashew tree will be given a monetary value and not seen upon as a waste product.

In addition to the Bio-Spray research ongoing the project is cooperating with GIZ Mozambique to develop the business plan for commercial nurseries owned by the communities or local entrepreneurs. The initiative is in line with the UN Sustainable Development Goals and is an example of encouraging cooperation between the German- and Norwegian private businesses and Governments institutions as well as local partners

Mozambique will have significant impact of scaling Bio Spray. By establishing systematic purchasing of cashew apples as a central ingredient to the Bio Spray and a network of sprayers, significant income will be redistributed in the communities. This comes in addition to the yield increase that results in a boost in small scale farmer income. By producing more cashew on the same surface area without harmful chemicals the promotion of intercropping of food-crops can be enhanced. Cashew trees function well with high nutritional value crops like beans, groundnuts and lentils – a strategy that can significantly improve food security in rural areas, not only in Mozambique, but also neighboring countries.