The price dumping in the banana sector in Germany and Europe is observed with great concern by the members of the Action Alliance for Sustainable Bananas. The alliance is strongly committed to ensuring a living wage for banana producers and more investment in environmental protection.

With the lowest banana prices in years on the way for the coming year, the ABNB reiterates the absolute necessity to improve smallholder incomes and wages for producers and plantation workers, to raise social standards and to invest in environmental protection and biodiversity conservation.

Producers and exporters from Costa Rica, Ecuador, Guatemala, Honduras, Colombia and Panama have again criticised the price dumping in German supermarkets. In an open letter at the beginning of November, they wrote that further price cuts destroy jobs and make it impossible to comply with social and environmental standards. A similar appeal was already given by Latin American banana producers in October 2018, nothing has changed since then. Therefore, the ABNB supports the appeal of the producers.

Germany in particular plays an important role in this issue: Germany is the largest consumer country of bananas in Europe. This means that the prices set here have a signalling effect for the entire European market. But supermarkets are increasingly offering bananas at extremely low prices in order to make the tropical fruit even more attractive to consumers. This is despite the fact that bananas come from the other side of the world.

ABNB wants to address this with its work and this statement. The overall goal of the ABNB is to make the production of all bananas sold on the German market more sustainable along the entire value chain. Only then can human rights be respected and environmental protection promoted. The ABNB calls on other German companies to join this goal. 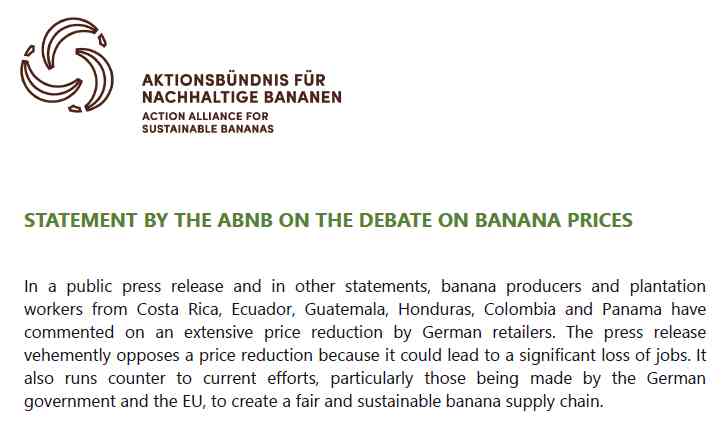